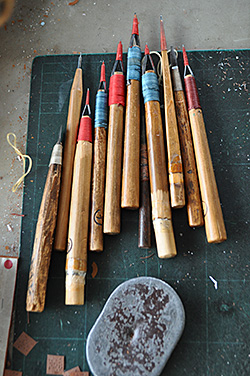 Different from regular traditional handicrafts, Designated Traditional Handicrafts are those that are recognized by the“Act on the Promotion of Traditional Craft Industries (Traditional Industry)”. This designation means that specific requirements must be met in areas such as “using traditional materials and techniques/skills that have been passed down to the present, and embodying their special qualities while still being improved to suit the current industrial environment and meet the needs of the times.” In order to be officially designated as a traditional handicraft under the law, the following requirements must be met.

01 Items that are primarily used in everyday life

This is defined as items that have real relevance in the daily life of families whether they are used all the time or only several occasions a year. It also includes items used for ceremonial occasions and seasonal festivals. Crafts are also known as “usable art” and through being touched and seen for a long time by many people, they have continued to be perfected for better usability. In addition, their color, pattern, or structure is deeply entwined with the Japanese lifestyle and cultural background.

Every aspect does not have to be made by hand, but parts of the item’s quality, structure, and design that make up its primary characteristics and special qualities should fall under the conditions of being “handmade.” Since each product will go through the process of being touched by human hands, it should be safe and have ergonomic dimensions and shape.

Traditional crafts are defined as those that have been passed down for over 100 years. The technology and techniques for making these products should have been used for over 100 years and are thought to have been established by improvement through trial and error at the hands of many creators. Although techniques and technology are inseparable, technology would be considered as “the skill of the creator” as it relates to the “craftsmanship” and “precision” of the individual, whereas technique is considered to be “having a historical knowledge of the know-how which encompasses selecting the raw materials to manufacturing methods.”The traditional technology and techniques to not need to exactly replicate the original ones but should include improvements or developments that can be made without creating fundamental changes to the product or its characteristics.

As with the 3rd condition, materials should be highly scrutinized and used for over 100 years. They should be friendly to both humans and the environment. Additionally, if the supply of certain materials is exhausted or hard to obtain, it is still considered traditional to convert to a similar material without changing the original taste of the item.

It is necessary for manufacturers to be located within a specific region to a certain scale, and that production of the item is established as a local industry. This scale is determined as over 10 companies or over 30 individuals. They should not just work as individual companies, but there should be a level of trust and responsibility throughout the production area as a whole. As of April 2009, 211 handicrafts from around Japan have been officially recognized by the Ministry of Economy, Trade and Industry.