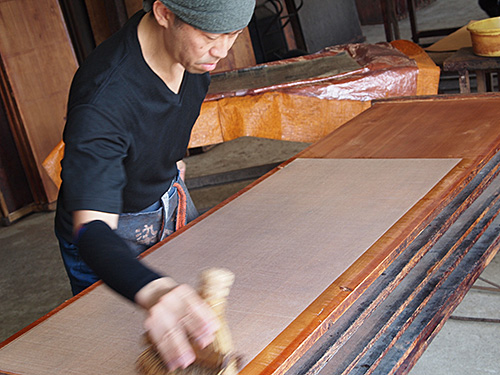 An explanation of the dyeing stencils that are primarily used for Ise Katagami.
Dyeing stencils are used to create komon, yuzen, and yukata patterns on textiles. The number of stencils used differs depending on the pattern. In the case of stripes, only one stencil is used. However, in the case of yuzen designs which include different patterns and colors, there may be hundreds of stencils required. This is because stencils are used according to pattern and color, so each stencil is considered to be its own pattern. Each stencil is engraved based on a design. These designs are created by designers at the request of the dyeing company, and often use classic Japanese patterns and motifs. They differ from normal pictures because all the lines are connected. To prevent the pattern from coming off when they are engraved, they are attached using connections called, “nige.”

There are four techniques used when creating Ise Katagami, each with their own unique characteristics.
When engraving large designs, hikibori (pull) and tsukibori (push) techniques are used. Alternatively, when making delicate patterns like komon, dogubori (carving) and kiribori (engraving) techniques are used. At times, push and pull techniques may be used to create smaller designs, but for the most part they are categorized as written above. Each technique has its own benefits. Hikibori can create straight lines, whereas the lines made when using tsukibori have a sway to them which gives a homemade feeling. It is also excellent for overlapping multiple layers. Kiribori produces only circular patterns and can be used for incredibly detailed engraving. Dogubori uses a different chisel depending on the pattern, so it is excellent for creating well-balanced designs. The engravers use many layers of katajigami when engraving the stencils. It might take a day to create a striped dyeing stencil using pull techniques, however complex stencils may take around a month to complete. This duty requires both the patience and perseverance of the craftsman. Depending on the engraving process used on the finished stencil, it may need to be fastened using stretched fabric, usually a net of silk threads that are pasted with varnish. Completed stencils are shipped to the dyeing company, where they are used to dye textiles and clothing.

When starting the dyeing process, the stencil is first soaked in water to prevent it from stretching.
Then, a dye-resistant paste is placed on the fabric. In principle, each color is dyed once at a time, so depending on the pattern, this may be repeated several times. Cloth which has been pasted is then dyed with the dyeing agent. After that, the paste is washed away leaving white behind and making a pattern. If several colors are being used, the final one will be the strongest, so dyeing starts with the base color. In the case of stripe patterns, one stencil is pasted and placed at a time. Stencils have “star” marks on them which are relied on during use. After the dyeing is complete, some alterations are made, and the fabric is complete. It is then bought by kimono wholesalers. This process differs slightly when dyeing yukata robes, and a method called “chosen” is used. The resistance paste is placed in a specific order on the attached cloth. Then, it is folded and layered. After this, the air is sucked from the bottom and the dyeing agent is released starting from the top. In doing so, the paste at the topmost point creates an embankment which prevents the colors from mixing, so multiple colors can be used. By adding water, blurred patterns can also be created. The cloth is flipped over and the dyeing agent is released again. After this, the paste is washed off and the garment is complete. Stencils that have been used to dye textiles are saved. They may be used again, or they may be kept as references. Many dyeing companies store thousands of stencils. Based on this stock new stencils are also ordered. Both dyeing shops and stencil makers work hard to better their craft through friendly competition and aim to create even better garments.